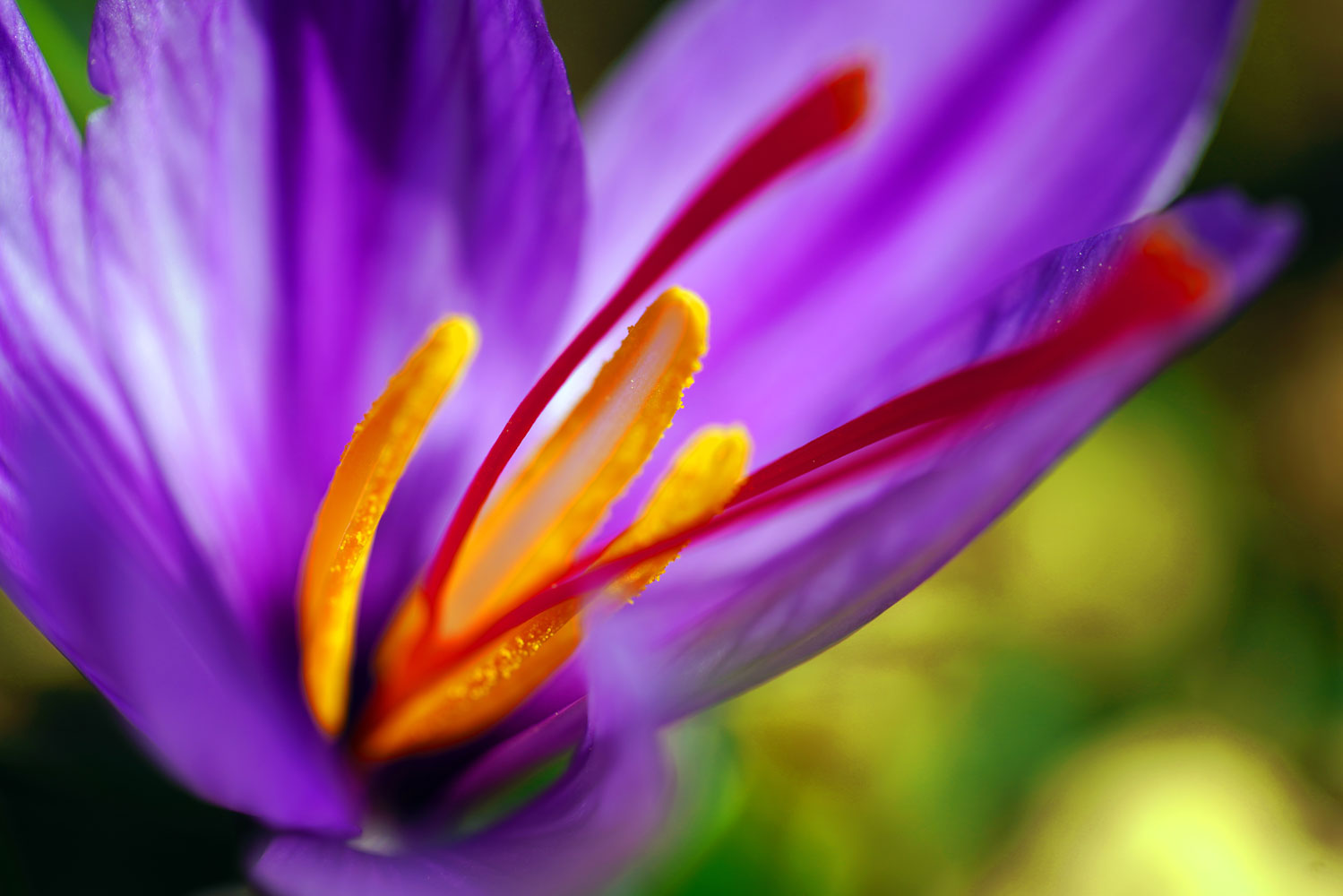 Saffron (pronounced /ˈsæfrən/ or /ˈsæfrɒn/) is a spice derived from the flower of Crocus sativus, commonly known as the “saffron crocus”. The vivid crimson stigma and styles, called threads, are collected and dried to be used mainly as a seasoningand colouring agent in food. Saffron has long been the world’s most costly spice by weight. Although some doubts remain on its origin, it is believed that saffron originated in Iran 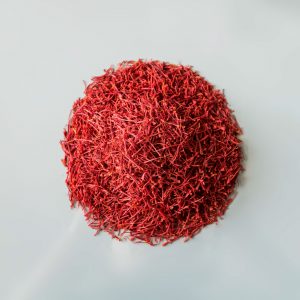 Saffron (pronounced /ˈsæfrən/ or /ˈsæfrɒn/) is a spice derived from the flower of Crocus sativus, commonly known as the “saffron crocus”. The vivid crimson stigma and styles, called threads, are collected and dried to be used mainly as a seasoningand colouring agent in food. Saffron has long been the world’s most costly spice by weight. Although some doubts remain on its origin, it is believed that saffron originated in Iran. However, Greece and Mesopotamia have also been suggested as the possible region of origin of this plant. C. sativus is possibly a triploid form of Crocus cartwrightianus. Saffron crocus slowly propagated throughout much of Eurasia and was later brought to parts of North Africa, North America, and Oceania.

Saffron’s taste and iodoform- or hay-like fragrance result from the chemicals picrocrocin and safranal.It also contains a carotenoid pigment, crocin, which imparts a rich golden-yellow hue to dishes and textiles. Its recorded history is attested in a 7th-century BC Assyrian botanical treatise compiled under Ashurbanipal, and it has been traded and used for over four millennia. Iran now accounts for approximately 90% of the world production of saffron.

A degree of uncertainty surrounds the origin of the English word “saffron”. It might stem from the 12th-century Old French term safran, which comes from the Latin word safranum, from the Arabic za’farān,[13] which comes from the Persian word zarparan meaning “flower with golden strings (implying either the golden stamens of the flower or the golden color it creates when used as flavor)”.[14]

The domesticated saffron crocus, Crocus sativus, is an autumn-flowering perennial plant unknown in the wild. It probably descends from the eastern Mediterranean autumn-flowering Crocus cartwrightianus,[15] which is also known as “wild saffron”[16] and originated in Crete or Central Asia.[17] C. thomasii and C. pallasii are other possible sources.[15][18] As a genetically monomorphic clone,[17] it slowly propagated throughout much of Eurasia.

It is a sterile triploid form, which means that three homologous sets of chromosomes compose each specimen’s genetic complement; C. sativus bears eight chromosomal bodies per set, making for 24 in total.[19] Being sterile, the purple flowers of C. sativus fail to produce viable seeds; reproduction hinges on human assistance: clusters of corms, underground, bulb-like, starch-storing organs, must be dug up, divided, and replanted. A corm survives for one season, producing via this vegetative division up to ten “cormlets” that can grow into new plants in the next season.[20] The compact corms are small, brown globules that can measure as large as 5 cm (2 in) in diameter, have a flat base, and are shrouded in a dense mat of parallel fibres; this coat is referred to as the “corm tunic”. Corms also bear vertical fibres, thin and net-like, that grow up to 5 cm (2 in) above the plant’s neck.[19]

The plant sprouts 5–11 white and non-photosynthetic leaves known as cataphylls. These membrane-like structures cover and protect the crocus’s 5 to 11 true leaves as they bud and develop. The latter are thin, straight, and blade-like green foliage leaves, which are 1–3 mm (0.04–0.12 in), in diameter, which either expand after the flowers have opened (“hysteranthous”) or do so simultaneously with their blooming (“synanthous”). C. sativus cataphylls are suspected by some to manifest prior to blooming when the plant is irrigated relatively early in the growing season. Its floral axes, or flower-bearing structures, bear bracteoles, or specialised leaves, that sprout from the flower stems; the latter are known as pedicels.[19] After aestivating in spring, the plant sends up its true leaves, each up to 40 cm (16 in) in length. Only in October, after most other flowering plants have released their seeds, do its brilliantly hued flowers develop; they range from a light pastel shade of lilac to a darker and more striated mauve.[21] The flowers possess a sweet, honey-like fragrance. Upon flowering, the plants are 20–30 cm (8–12 in) in height and bear up to four flowers. A three-pronged style 25–30 mm (1.0–1.2 in) in length, emerges from each flower. Each prong terminates with a vivid crimson stigma, which are the distal end of a carpel.[20][19]

The saffron crocus, unknown in the wild, probably descends from Crocus cartwrightianus. It is a triploid that is “self-incompatible” and male sterile; it undergoes aberrant meiosis and is hence incapable of independent sexual reproduction—all propagation is by vegetative multiplication via manual “divide-and-set” of a starter clone or by interspecific hybridisation.[22][15]

Crocus sativus thrives in the Mediterranean maquis, an ecotype superficially resembling the North American chaparral, and similar climates where hot and dry summer breezes sweep semi-arid lands. It can nonetheless survive cold winters, tolerating frosts as low as −10 °C (14 °F) and short periods of snow cover.[20][23] Irrigation is required if grown outside of moist environments such as Kashmir, where annual rainfall averages 1,000–1,500 mm (39–59 in); saffron-growing regions in Greece (500 mm or 20 in annually) and Spain (400 mm or 16 in) are far drier than the main cultivating Iranian regions. What makes this possible is the timing of the local wet seasons; generous spring rains and drier summers are optimal. Rain immediately preceding flowering boosts saffron yields; rainy or cold weather during flowering promotes disease and reduces yields. Persistently damp and hot conditions harm the crops,[24] and rabbits, rats, and birds cause damage by digging up corms. Nematodes, leaf rusts, and corm rot pose other threats. Yet Bacillus subtilis inoculation may provide some benefit to growers by speeding corm growth and increasing stigma biomass yield.[25]

The plants fare poorly in shady conditions; they grow best in full sunlight. Fields that slope towards the sunlight are optimal (i.e., south-sloping in the Northern Hemisphere). Planting is mostly done in June in the Northern Hemisphere, where corms are lodged 7–15 cm (3–6 in) deep; its roots, stems, and leaves can develop between October and February.[19] Planting depth and corm spacing, in concert with climate, are critical factors in determining yields. Mother corms planted deeper yield higher-quality saffron, though form fewer flower buds and daughter corms. Italian growers optimise thread yield by planting 15 cm (6 in) deep and in rows 2–3 cm (0.8–1.2 in) apart; depths of 8–10 cm (3–4 in) optimise flower and corm production. Greek, Moroccan, and Spanish growers employ distinct depths and spacings that suit their locales.

C. sativus prefers friable, loose, low-density, well-watered, and well-drained clay-calcareous soils with high organic content. Traditional raised beds promote good drainage. Soil organic content was historically boosted via application of some 20–30 tonnes (20–30 long tons; 22–33 short tons) of manure per hectare. Afterwards, and with no further manure application, corms were planted.[26] After a period of dormancy through the summer, the corms send up their narrow leaves and begin to bud in early autumn. Only in mid-autumn do they flower. Harvests are by necessity a speedy affair: after blossoming at dawn, flowers quickly wilt as the day passes.All plants bloom within a window of one or two weeks.[28] Stigmas are dried quickly upon extraction and (preferably) sealed in airtight containers. 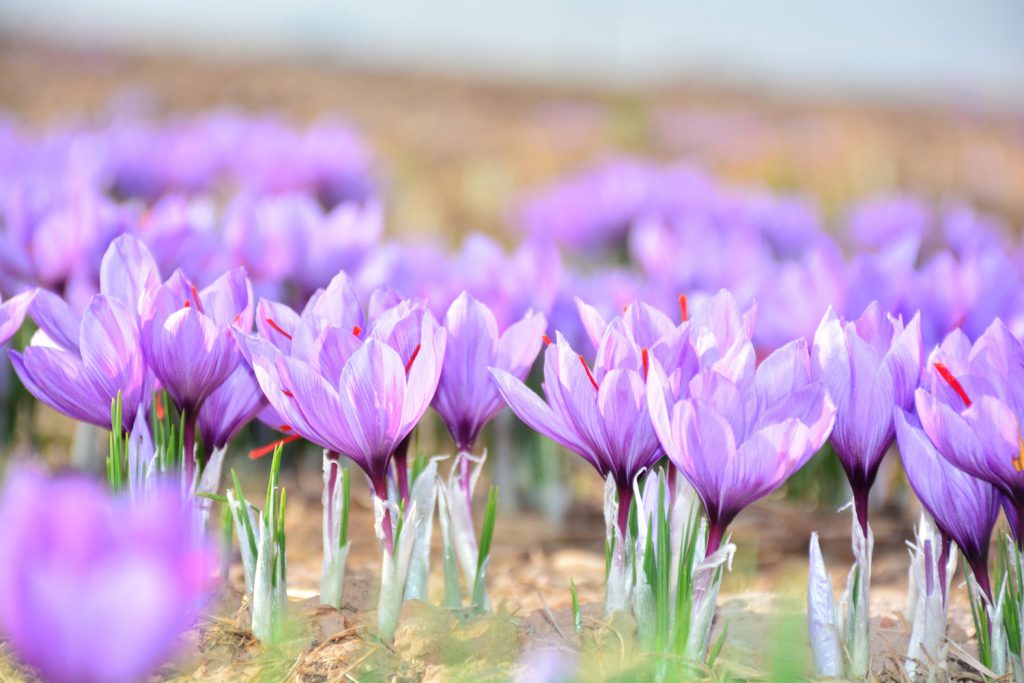